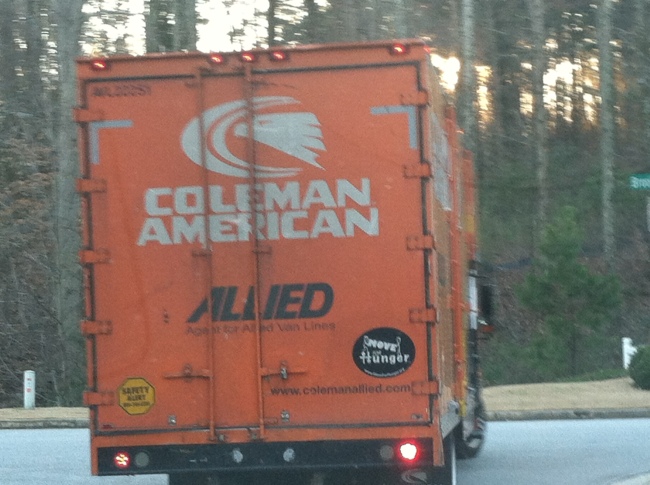 I remember the day I finally left our marriage. It was the day that I had had enough of crying & praying & trying & talking & putting myself out there to my husband in ways that were not necessarily the norm for me. I gave it all up. I threw my hands up at God & told him, I can’t fix this. This is your child and your situation, have at it. Not realizing that that was the day God unfolded his arms, smiled a smug little smile, poured down something on the inside of me that gave me strength to walk away & he began his work on the both of us.

See, I had always figured that I, or “We” needed to be the ones to fix our marriage. You know, that thing that “we” put together (never even for one second considering God’s power in our marriage). I mean, I prayed to him & talked “at” him about possibly “assisting” me with my marriage but I don’t think I ever consulted him “specifically”.  Because I realized that in consulting him, his will, which in my opinion, was very methodical and slow moving, would now be in play and I would have to relinquish my will and my desire to “hurry up” and fix this thing, LOL. No ma’am, no sir!  “We” needed to fix this!

This was my thinking and God knows we did everything within our power to do so.  And as I think back to everything that we tried, for example, the counseling, the talks, the walks, the dinners, etc., God purposely let every attempt FAIL. He (God) needed to bring us out so that everybody who saw us destroy our marriage, could now see God revive it & bring it back to life. God wanted the glory!  He didn’t want Peaches with her strong prayer life to get it (because I would have been boastful and proud of that). Nor did he want Pondy with his great humility & willingness to work hard at his marriage to get it (because he would’ve had some swagger and proud of people saying that about him). No, God didn’t want anybody stepping up & taking credit for fixing this monstrosity of a mess but him because if man got the credit than that meant man now had the power to pick & choose who he would “help” with his message and story of grace, mercy and salvation.  No, God wanted this Marriage to be saved by his might & his might alone! 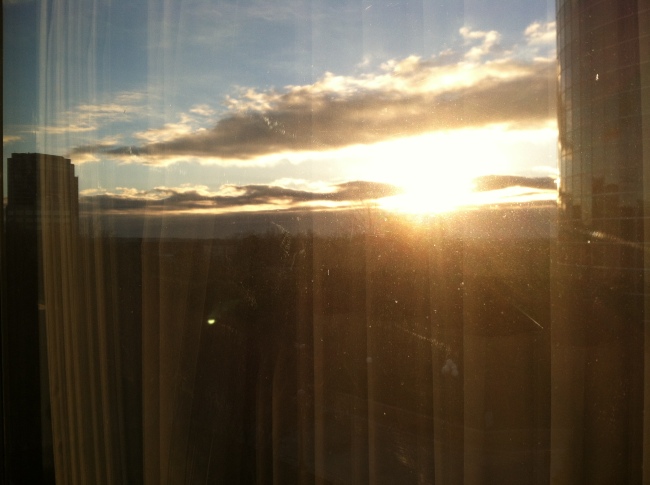 When I walked away, God showed up & quite beautifully, showed out. He began to melt our hearts and remove away all of the coldness, bitterness and anger. We began to feel empathy for another & for what the other person had been enduring this whole time. We began to see each other as God saw us, humanly flawed but with so much love and passion for one another. I love my husband so much more today because God showed me that he’s human and flawed, just the way he (God) designed him. His weaknesses, that use to once upon a time send me over the edge with anger, now made me empathetic and understanding and more appreciative and grateful for even the smallest gesture of kindness.  I am grateful for the day I walked away from my marriage! Because that was the day God was able to began the healing process in both of our lives.

We always talk about “giving it all to God & not worrying about it”. I’m gonna “leave it at the altar”. Child, bye! LOL! Whenever you hear somebody say that, go pray harder for them because if anything, they’ve actually picked up more that God was suppose to be handling & brought it back with them. Our intentions are truthfully well meaning to “leave it with God” but by nature, it’s so very hard to do. I wanted to fix my marriage but I didn’t have the power nor the capacity to do so, or at least I didn’t know how to tap into that power. Therefore God had to almost force me out of the way so that he could bring this thing BACK to where he desired it to be. And for that, I will be forever grateful for the day I left my marriage.  It was the beginning of the best days of my life. #How My Divorce Saved My Marriage.  #HMDSMM. 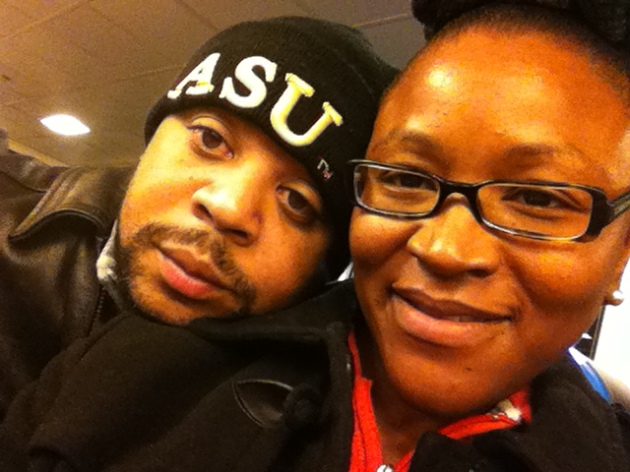 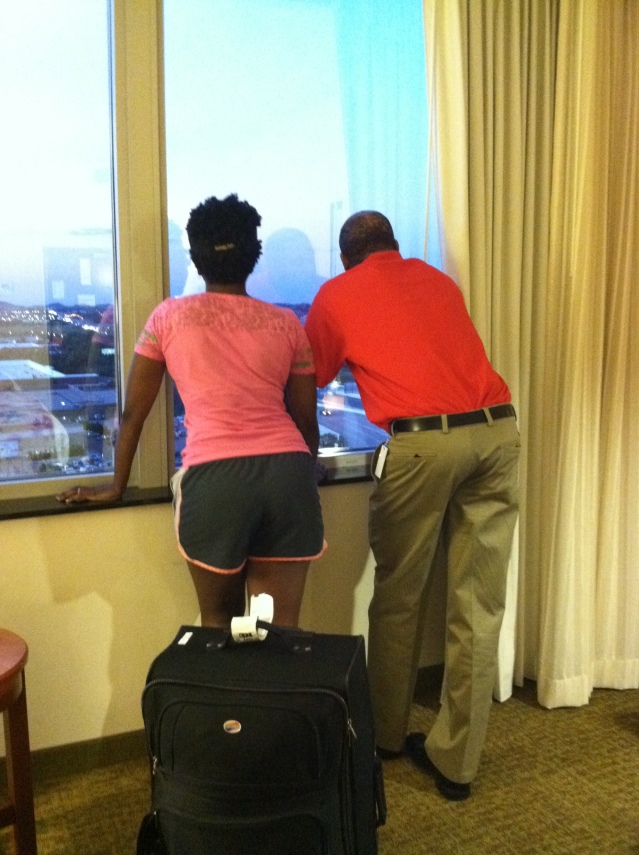 Okay, now before many of you “comment” on how cute this butt shot is of me & the hubby, LOL, that’s not what this photo is about…although, we do have 2 of the cutest butts ever, LOL! But seriously, the photo is a caught off guard moment taken by our kids who snapped this picture as Herman and I we’re standing in the window of the Drury Inn Hotel in Franklin, (Cool Springs) TN.  We had just checked into the hotel preparing for our weekend of viewing houses.  Yes, this was about to be our new home for the next 5-7 years and we were standing, quietly, in the window, taking in the view of the city but more importantly, thinking it all over.  Unexpected Blessings…or was it?  Were we making the right decision for our family?  Had we prepared enough for the work load and the new roles of responsibilities that we were both about to take on?  We had been through enough stress and uneasiness in the short little 12 years of marriage, we’re we at all ready to put our family through more? A lot of questions & wavering were going through our minds at that very moment the kids snapped this picture of us.  I call it, “A Window Meeting of The Minds” because even though there weren’t a lot of words exchanged in this moment in the window, we were both grappling internally with the same questions.

We wanted to be sure that this was the best move for “Everybody”.  And not however for just one person’s career or to afford the kids a more relaxed environment to grow up in, one like we had, or for someone to be able to “slow down” a bit since that person, whom shall remain “nameless”, LOL, was always complaining about, as much as “SHE” loved it, “Life being too busy”.  This “unexpected” move had to be what everybody wanted.  Was it a blessing or was it the end of us for sure this time because there were going to be many looong work nights for Herman & many daunting & tedious decisions & tasks that I was going to have to take on, alone.  The kids were going to now be 4 hours away from our closest family members instead of 2.  Could this be what God wanted for us?

Well, we talked about it, prayed about it and jumped right in head first!  3 months into one of the biggest decisions we’ve ever made as a couple/family and we haven’t looked back.  The move, at the present moment, seems to be exactly what God wanted us to do.  But I won’t lie, there are some days that we both miss home & the normalcy of “Life” as we knew it & the “comfortable” surroundings that we were accustomed to.  Yes, we do have our moments but in the big scheme of things, we now know that “Change” is not always bad!  Scary, definitely!  But only because we wanted to be sure that this was in fact, one of those “Unexpected Blessings”!  And at the present moment, I can confidently say, “we trusted him & he didn’t leave us”.  So “Far” (literally, LOL), so Good yall!

Question, have you ever been faced with a decision that would have not only affected your career but your marriage (pretty scary if you ask me!)?  However, you stepped out on faith & took the road less traveled (meaning, nobody we know would’ve taken the road 65 North to Springhill, Tennessee, LOL, kidding).  And how did it turn out?  #UnexpectedBlessings!  #HowMyDivorceSavedMyMarriage #HMDSMM